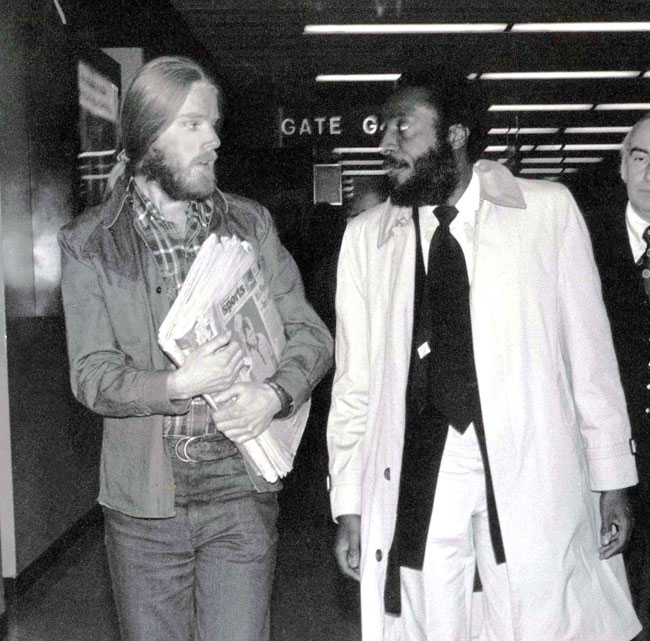 I know three world class story tellers.  My brother-in-law Frank McDonald who married my sister Lois in 1971 is one of them though he’d never admit it.  Cliff Walker and Janna Cosby are the other two.  I met Janna in 1978 and Cliff a few years later.  In all this time I’ve yet to meet a fourth person deserving of world class story teller title.

Greg Glomb introduced me to Janna.  Greg is one of my friends from the old Hinsdale days.  He and Russ were good friends and was often around when the 1010 rehearsed and performed.  Greg was a year ahead of me in school.  We became friends as our professional paths crossed at Hinsdale Camera where my photography career was launched as was Greg’s video production career. Janna was raised in Flora, a little Southern Illinois town where her father, Prentice Cosby was the local judge.  Greg met Janna at Southern Illinois University where they both majored in video and TV production.   They fell in love and moved back to Hinsdale after graduation.  Janna began working for ServiceMaster Corporation as a writer/producer.  Greg worked for Hinsdale Camera as a videographer.

While trying to get my professional bearings as a young man in my late 20’s in the shadow of my 5 year odyssey as Mr. Natural with Moss Hill Natural Foods, I was pursuing commercial photography assignments.  One day Greg calls me.  Hadn’t heard from him in years.  He tells me about Janna and that she is hiring photographers and that I should make an appointment to meet her.

I met Janna at ServiceMaster Corporate in Downers Grove where I showed her my portfolio of photographs.  Janna was very complimentary and though totally professional she charmed me with her warmth and hospitality.  Greg later told me that Janna was totally blown away with my photography.

Within days Janna hired me for a photography project at ServiceMaster.  She was a delight to work for.  Janna is masterful at working with creative people in the corporate world.  She pushes the envelope, breaks the rules of convention when appropriate, demands perfection, and delivers excellent results no matter what it takes.

I made good money with Janna while she was at ServiceMaster also adding prestigious examples to my portfolio.  Janna soon outgrew ServiceMaster and was hired by AT&T as Director of Corporate Communications.

I had expanded my professional horizon to include all manner of creative communications while working as a sales rep for Vanides and Mlodock, a graphic design firm in Chicago.  Janna called on me for creative concept ideas at AT&T.  Steve Vanides encouraged me to start my own agency using my connection to AT&T with Janna.

I formed John Hora & Associates and began consulting for Janna at AT&T during the time of the big divesture looming on the horizon for “Ma Bell” in 1983.  Newly married and on my own, AT&T was a great account to have and Janna poured work my way.

It was great money, a great client, and great fun.  Though a demanding task master, Janna was also a mentor to me.  Together we produced some of the most creative and ambitious projects of our respective careers.

Janna gave me entrée to the corporate world.

She leaned on me to develop creative concepts and ideas for the countless meetings, events, and projects required to carry AT&T through the sea change ordered by Judge Green in breaking up the telephone company monopoly.

Here I was, high school drop out photographer, working at the heart of one of the world’s largest corporations to develop creative communications in the midst of cataclysmic corporate change.  Janna had the corporate world by the reins and I had Janna’s 100% confidence to deliver the goods.

With virtually unlimited budgets and crushing deadlines, Janna took on each project with ferocious zeal handing over huge responsibilities to me.  Never before had I opportunity and funds to produce projects on such scale as was required here.  I was ripe with ideas.  My head was swimming with creativity.

Janna and I virtually danced our way through the work… our individual skills, talents, and gifts perfectly complemented each other.

One of my most favorite memories of working with Janna is of a major conference we produced for AT&T in the height of the pre-divesture corporate frenzy.   Pressure was mounting as the unknown consequences of divesture faced one of America’s greatest and largest corporations.

Knowing the pressure that faced these executives, I thought we should use comedic relief as a tool to help them get perspective.  I suggested we hire “Professor” Irwin Corey to deliver a key note speech to the Midwest regional vice presidents.

“Professor” Irwin Corey was the most frequent guest of Johnny Carson’s Tonight Show and often appeared on The Smother’s Brother’s Show.   He is a famous comedian and actor known for his irreverent satire of the intelligencia.

As a closely guarded secret, Janna hired Irwin Corey to deliver a key note address toward the end of a three day, critical conference of the AT&T Midwest Vice Presidents pre-divestiture conference at Timber Ridge Lodge in Lake Geneva, Wisconsin.

After three exhausting days of serious career defining meetings, Irwin Corey as mystery guest was introduced as a speaker from an East coast university to talk about the economic impact of the divestiture of AT&T on the US economy.

We had prepped Irwin on the who’s who in attendance.  He was marvelously irreverent in sending up all the VIP’s there.  Uproarious laughter erupted as Irwin dressed in disheveled tuxedo and sneakers carrying a dozen fake rolled up charts stumbled toward the stage down the center aisle.

The next 30 minutes with Irwin Corey at the podium were a hilarious dissection of revered AT&T corporate leaders.  It was exactly what they needed to relieve the pressure of the serious decisions faced that weekend.

It was great fun and also serious business.  Employing the likes of the beloved Irwin Corey to couch the impact of corporate culture change was both a risky challenge and a great delight, and it worked.

The success of that meeting afforded me additional opportunity to work for AT&T.  I never have imagined that I would be an integral player in the fate of one of the largest corporations in the world.

It was all because of Janna.  She entrusted me with a great responsibility and given the opportunity I found myself able to rise to the occasion.  Janna gave me the biggest shot of my career.   Many other projects with AT&T ensued to keep me busy and gainfully employed.

Janna left AT&T to form her own company.  She graciously employed me to work with her on similar projects for Holiday Inn, Pioneer Seed, Motorola, and others.

Measure my career path and note the great spike caused by Janna’s confidence in me.  She was the single greatest influence that propelled my professional future.  I owe you big time Janna.